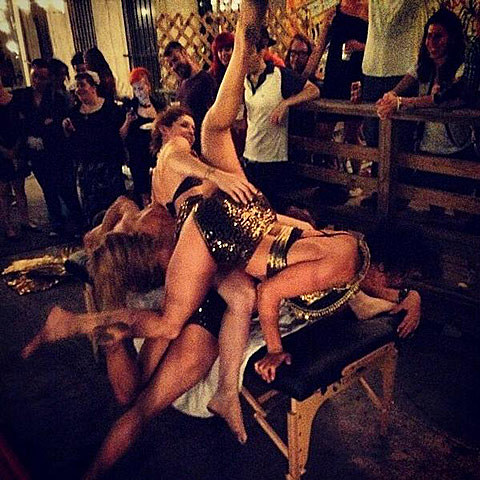 Brooklyn's arts/performance space/circus/venue House of Yes has successfully funded their Kickstarter campaign to pay for a new Bushwick home for the venue, a little over a year after shutting its doors on its old East Williamsburg location. To celebrate, House of Yes threw a party on Friday night (8/1) on a rooftop near the Morgan L (not actually at the new venue spot) with fire-breathers, contortionists (see above) and more..

The new location -- signed to a ten year lease and will be legit -- is at 408 Jefferson Street  (at Wyckoff Ave) and is scheduled to open in November. A bit about the new space from House of Yes's Kickstarter page:

The new House of Yes will be a venue where artists can create and present work and audiences can celebrate, socialize and be inspired. The 5,000 sq ft space will have a theater that seats 200, and a standing room of 400!!!