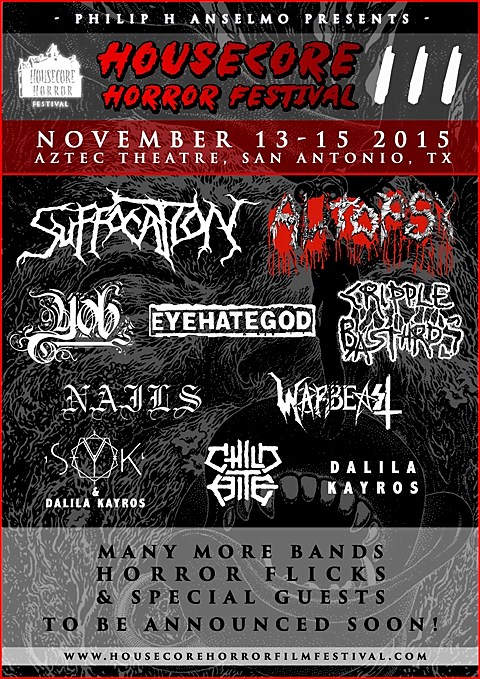 Pantera/Down frontman Phil Anselmo's Housecore Horror Festival is returning for year three this November, and will now be held in San Antonio, TX (it was previously in Austin). The festival will be at the Aztec Theater from November 13-15, 2015, and so far the lineup includes Suffocation, Autopsy, Cripple Bastards, Nails, SYk & Dalila Kayros, YOB, Eyehategod, Child Bite and Warbeast, with many more TBA.

Anselmo said he wanted to continue the festival to honor festival co-founder Corey Mitchell, who sadly passed away last year. He said:

I've got a great team in place to help make this what Corey and I wanted it to be. There are a lot of mixed emotions here because no one can replace him. But, we know he would want this to continue and so that's what we're going to do. We miss him and think about him every day.

In addition to the music, the festival will screen "film gems from the personal vaults of both Anselmo and Mitchell." Tickets will be on sale soon.

It's a busy year for Phil Anselmo. He recently said in an interview that he's working on new music with Superjoint Ritual, his '90s-'00s supergroup with Jimmy Bower (Eyehategod, Crowbar, Down) and frequent collaborator Kevin Bond, which reunited at last year's Housecore Horror fest (video below). He also mentioned he's working on new Illegals material, and has a "secret death metal project with some secret other guys from across the equator." Who could they be?