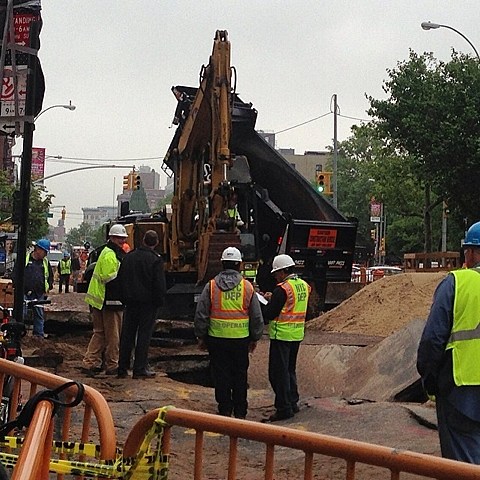 You may have heard that yesterday (5/22) a water main ruptured and caused a giant sinkhole on Houston St. outside Katz's Deli which flooded their basement (but didn't cause them to close), affected other nearby business, and caused both shows at Mercury Lounge to move to new venues. An updated report from NBC reads:

City officials said five commercial buildings and eight residential buildings were without water for several hours, but the main was repaired and service was restored by about 1 a.m. Thursday. Crews worked overnight to make road repairs, which were expected to be completed sometime Friday.

Basements of several buildings were flooded, including Katz's, owner Jake Dell said. An entire garbage truck's worth of food had to be thrown out.

Mercury Lounge is back open tonight (5/23), including the 6:30 show with Baby Baby, the 7:30 show with American Aquarium and Elijah Ocean, and the 10:30 show with Rebelmatic and Radio Daze.

Initially, tonight's late show at Merc was MO, but she was moved to Music Hall of Williamsburg weeks ago, nothing to do with the sinkhole. The rising MO meanwhile announced a Webster Hall show yesterday and that's on sale now.