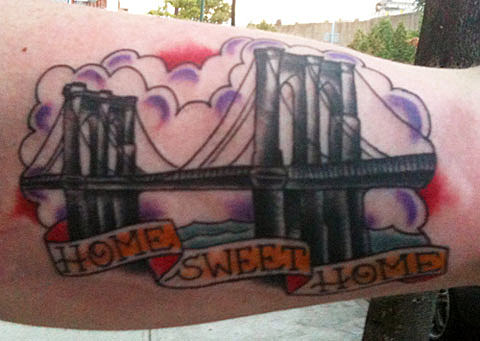 Let's talk about Brooklyn. Brooklyn is a place where artists gather. There are galleries, and loft parties, and record stores. A dude who presses vinyl lives there. So does a dude who makes stickers and a woman who books a venue. Because there's an infrastructure that supports getting shit done, people do shit, and a lot of the shit they do is cool. Someone is a recording engineer. Someone is a graffiti artist. Someone has a blog. There's a lot of energy, and a lot of people to know. Information--"Know a cheap place to print posters?" or "Who can play the tambourine in my Jefferson Airplane cover band?"--is the coin of the realm.

But Brooklyn has a downside. Those who abandon their RMS to come to Brooklyn risk co-option by an aesthetic Borg. Things get mushy. There's too much input, and there's not a lot that's not known. Somebody's band sounds like Howlin' Wolf and ESG and Gang of Four, but also sounds like REO Speedwagon and Glenn Branca and The Pointer Sisters. There aren't many secrets. There are no mountains to go over.

Do not confuse Brooklyn with, well, Brooklyn--the New York borough that sits about 230 miles from Washington on the southwest end of Long Island over the Verrazano-Narrows Bridge off of I-278. There are many Brooklyns. Los Angeles is Brooklyn. Chicago is Brooklyn. Berlin and London are Brooklyn. Babylon was the Brooklyn of the ancient world. In the 1990s, Seattle was Brooklyn. Young Chinese punks challenging Communism risk prison to make Beijing the Brooklyn of tomorrow.

MUCH more where that came from at the Washington City Paper.