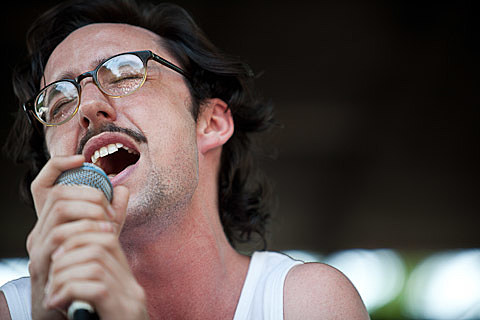 Brooklyn ambient popper How to Dress Well aka Tom Krell (who now calls Chicago home) is set to kick off a tour in June with Warp-signed Babe Rainbow and Aaron Read. That tour includes mostly west coast and Canada dates but it will come to NYC for a Brooklyn show on June 9 at Public Assembly. Tickets for that show went on sale this morning.

As Exclaim points out, Babe Rainbow (aka Cam Reed) and Aaron Read are on board to play live with HTDW at the shows, and the three musicians will be previewing some new material off of what will eventually become a new HTDW release. "This next album is about opening my heart, opening myself, to receive an address from myself I've been waiting for, for too long," said Tom of his new material.

In addition to assisting HTDW on stage, Babe Rainbow will also be open all dates on the tour. Check out a video of "It's All Happening" off his 2011 Endless Path EP with all dates below.

Babe Rainbow - It's All Happening from Sean Arden on Vimeo.