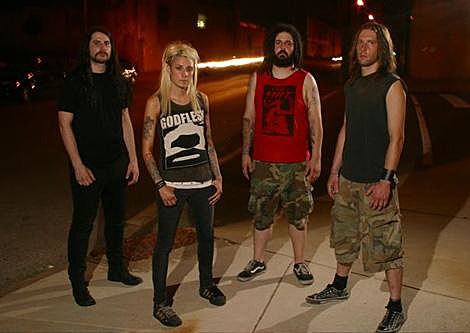 A few months after wowing me at SXSW (twice), Relapse Records have announced the signing of Providence's Howl! Congrats dudes and lady!

Howl is one of many greats lined up for the BV-BBG Northside Show at Club Europa on June 14th. Make sure that night is free to receive a severe pummeling from:

That last band that on the list is the newest addition to the Europa roster... NYBMers Liturgy! Tickets are still on sale, or use your Northside Badge to get in.

Liturgy dropped their 2008 LP Immortal Life on Infinite Limbs (get it here), but have completed recording on their next LP, Renihilation, which will see will release on the mighty 20 Buck Spin (!!!) this fall. "Ecastatic Rite" is from that LP, and downloadable above.

The band will be playing a double header on June 14th, having also lined up an acoustic (!) gig earlier in the day along with 47 others as part of Todd P's Unamplified Acoustic BBQ.

And you can catch Liturgy TONIGHT, Friday, June 5th, at Market Hotel. They're on the bill with Titan, Child Abuse, Nymph, and Gay Beast.

Liturgy is also part of an ongoing art exhibition at Dispatch entitled Mirror Me by Brandon Stosuy & Kai Althoff. More details on that exhibition are here.

All Liturgy dates, and a video from a previous time they played Market Hotel, are below...