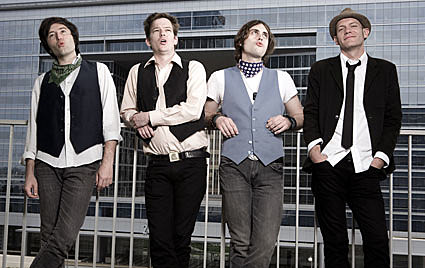 I missed the Howlies last time they were in NYC. How were they? I'd like to believe the comments on this one, but all they really tell me is that Atlanta bands do not all get along. 'The Atlanta Rock Blog' has nice things to say though...

"The Howlies might just be my new favourite Atlanta band. Fun doesn't even begin to describe their set on the side stage. And whoever decided to put them on the side stage should have his head examined. The band is full of raw powerpop potential and energy. And might I add that if you are going to cover a song, especially at a festival showcase such as this, you had better make it count. That's exactly what The Howlies did with their cover of R. Kelly's "Not Guilty". The swarm of people crowding around the side stage who saw it will be talking about it for weeks to come. Their original songs were even better though. Before I give you the link to their MySpace page, I must warn you that the demos you will hear on there do this band absolutely no justice whatsoever, and you should pay no attention to them."

The Howlies play Mercury Lounge in NYC tonight (August 18th). The Muslims, a San Diego band with a similar 'garage' feel, play Bowery Ballroom before The Walkmen tonight. Howlies AND The Muslims both play Union Pool in Williamsburg on Wednesday. Album info:

Howlies formed in August 2007, after a group camping trip where all four members were attacked by wolves, creating an infectious, unexpected sound that is equal parts '60's garage, ATL crunk, and doo-wop. Based upon basement recordings only, the band quickly secured the praise and producing duties of legendary producer Kim Fowley (The Runaways, The Modern Lovers, The Germs) for their debut album, "Trippin' with Howlies". The album is scheduled for a Fall 2008 release on OverUnder Records (New York, NY), with the single/EP, "Sea Level", releasing in August 12, 2008.

All Howlies tour dates below...