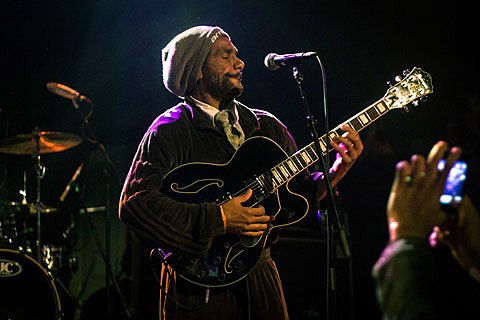 H.R. of Bad Brains plays night two, Monday, of that Manhattan benefit, but first he'll headline a Brooklyn show of his own at Public Assembly tonight (4/29) with support from Paranoid Social Club, The WonderMics, Groundswell, Matt Pless, and Jay Samel. Tickets are on sale.

Also going down in the near future at Public Assembly, Idiot Glee (who we profiled last year) will play with Nick Diamonds (of islands), Celestial Shore, and DJ Udbhav on May 11th. $8 gets you in. Idiot Glee recently posted a new video for "That's All For Everyone" which is viewable below. The track comes from the band's Don't Go Out Tonight 7" and is a cover of Fleetwood Mac. Pick up a copy.

Public Assembly will host The X-Ecutioners, Da Beatminerz and "special guests TBA" alongside resident DJs Total Eclipse and Gen.Erik on May 3rd. Details, including cost, are forthcoming but prepare for a night of jaw-dropping turntablism.

NYC PopFest is coming to Public Assembly, as is Tombs/Ulcerate in May and Martyrdoom in June!

Check out that Idiot Glee video and more videos below.

Idiot Glee - That's All For Everyone (Official Video)