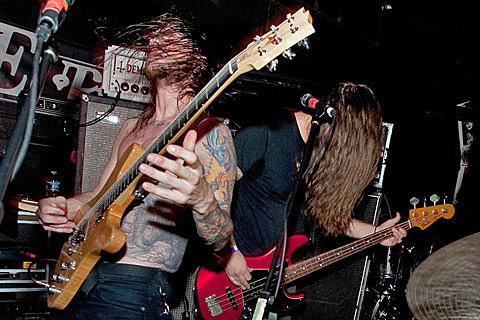 BrooklynVegan and 1000 Knives are proud to present Hull their SXSW-bound tourmates Batillus (all dates TBA), and Caltrop and one more very special guest TBA on March 26th at The Studio at Webster Hall at 7PM. Tickets are on sale.

Hull are working on a new full length, and was last seen in NYC at Europa supporting doom greats Pentagram. The band will release their epic Viking Funeral EP on vinyl via Science of Silence records this spring.

Caltrop are currently finishing up the recording of their second full-length with the help of Nick Peterson (Megafaun, Horseback). The band is scheduled to play the Bull City Metal Fest in Durham, NC on 2/4 & 2/5 alongside bands like U.S. Christmas, Royal Thunder, Sons of Tonatiuh, Colossus, Music Hates You, and many others. Tickets are on sale.

Batillus signed onto Seventh Rule for the release of their new LP, due out this year. We last saw the doom quartet in 2010 when they teamed up with Cough, Naam, and Sea of Bones at The Charleston. Batillus was recently contributed to the NYC Sucks compilation by MetalSucks which features new songs from faves like Tiger Flowers and previously released material from Made Out of Babies, Castevet, Naam and others.

A couple reminders while we're on the subject: Radiation Black Body (featuring Josh of Castevet), Vaz (2/3 of Hammerhead), Xaddax (Nick Sakes from Dazzling Killmen) and Fall of Another Day will play Bruar Falls TONIGHT (1/26) while Josh's other two projects (Castevet & Defeatist) will play Acheron on Friday (1/28) with Phantom Glue. Naam plays a FREE show on Thursday (1/27) at Union Pool with Liturgy, Your Youth and ARMS (the first show recommended in both an Evillive post and This Week In Indie).

Another reminder: Kylesa, Rosetta, Fight Amp, and East Of The Wall play Santos TONIGHT (1/26) and tickets are stil available. The show kicks off a shade after 7PM.

Some videos of the bands in action are below.