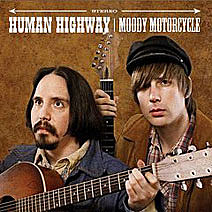 To celebrate the album's release, courtesy of the good folks at Suicide Squeeze Records, the band has announced their first ever live performances for the lucky few in the New York Metropolitan area. Appearing as co-headliners w/ Harper Simon, Thorburn and Guthrie will bring Human Highway, for the first time ever, to New York's Cake-Shop on Monday, September 15th, and the lovely Joe's Pub on Tuesday, September 16th.

Joe's Pub tickets don't seem to be available as of the time I'm writing this. Cake Shop probably won't have advance tix.

Stream the entire Human Highway album on their MySpace. The tracklist is below.

Nick Thorburn's other band Islands is playing a NYC show on August 23rd.