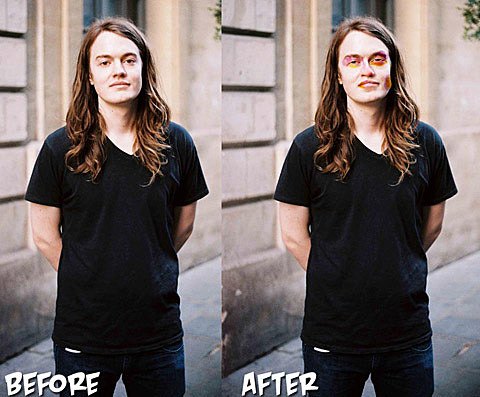 Jeff Tandy, creator of the above photo, writes:

"I'm calling you out, Hunt-Hendrix! I'll be at Martyrdoom Fest in Brooklyn on June 30, 2012. I hate you. I hate what you do. Come down and we'll fight!... I will feed you all the Brooklyn sidewalk you can eat, HHH. I'll show you the side of black metal you don't have the fortitude or will to explore. Seriously, I will fuck you up."

The above challenge was issued to the the Liturgy frontman in a Facebook group called "Hunter Hunt-Hendrix, come fight me." The creator, Jeff Tandy of Birth A.D., Averse Sefira and an ex-live member of Krieg, is not making his feelings about the Liturgy frontman secret, though it's hard to take the group completely seriously with photos like the one above. I hope it's not real though. Exerting your energy into bands you don't like takes away from finding bands that you do.

Though Jeff Tandy will be there, neither Jeff nor Hunter will be performing at the Martyrdoom Festival on June 30th at Public Assembly. Tickets are still available (no word on whether Hunter plans to attend).

Hunter will be performing at Metallica's Orion Festival in June though... along with bands like (?!?) Modest Mouse and Arctic Monkeys.