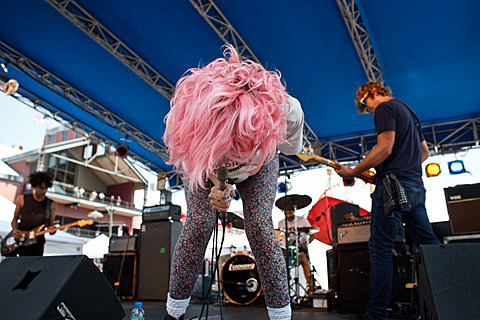 Brooklyn's Hunters signed to Mom + Pop earlier this year, and they've since announced that the label will put out their self-titled debut album on September. It was recorded at Chicago's Electrical Audio Studios by Greg Norman (Kim Deal, Jason Molina, Pelican, OM), who has helped give a sludgy vibe to the album's two singles, "Street Trash" and "Seizure," which you can listen to below.

Before the album is out, Hunters will be going on an August tour with Hunx and his Punx, which culminates in a NYC show on August 24 at Death by Audio.

UPDATE: Death by Audio's site no longer lists Hunx as playing and instead now lists a band named "A Monk & his Trunk." Hmmm. Admission for that show is $10 at the door. All dates are listed below.

Meanwhile, Hunx and his Punx are releasing their own new album, Street Punk, next week (7/23), and you can stream that album in its entirety below. They also have their own NYC show right before the tour happening on on August 8 at 285 Kent with Chain and the Gang and Juan Wauters (of The Beets). Tickets for that show are still available.

All dates are listed, along with all streams, below...

Hunx and his Punx - Street Punk

Filed Under: Hunters, Hunx, Hunx and his Punx
Categories: Music News, tour dates
Comments
Leave A Comment
Back To Top