"Ok I woke up to a video of the rock hall being slowly ripped apart from this storm.. Nearly cried, I hate you now Sandy" - @Lindss123

damaged siding on the Rock Hall (via) 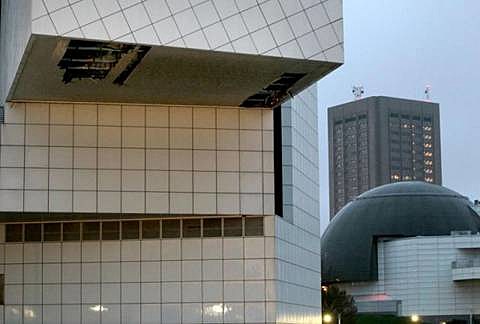 The east coast wasn't the only part of America to be damaged by Hurricane Sandy last night. As ABC News 5 points out, The Rock and Roll Hall of Fame in Cleveland lost some of its siding due to wind damage and water levels from Lake Eerie came close to flooding the building. Ultimately there are no reports that any of the memorabilia inside was damaged and the Rock Hall is still opening today (10/30), just an hour late (11 AM). You'll have to try harder than that to destroy the legacy of rock and roll, Earth.

An ABC News 5 video detailing the damage is below.