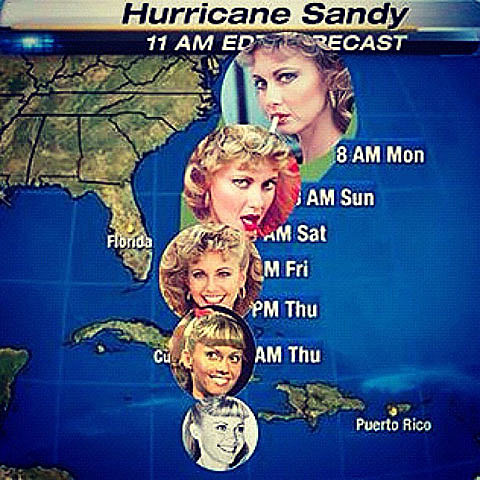 Hurricane Sandy is finally upon us, with the height of the storm hitting around 6 PM. Like Sunday, mass transit is closed and almost everything is cancelled. We'll update this list throughout the day but, as far as we know, the only major show still happening in NYC tonight is Swans at Music Hall of Williamsburg (though we expect a postponement announcement any minute) (Swans did play Bowery last night though). Swans is now postponed too.

Freddy's Bar says they're not closing and are even hosting an open mic.

Not sure if anyone is playing, but Pete's Candy Store "says Come & get us Sandy! We weren't afraid of Irene and we're not afraid of you! (but please don't hurt us) WE WILL BE OPEN TONIGHT. C'mon Over."

Luckily German band Fenster scheduled a lot of shows while they were here because their show last night at Shea Stadium was cancelled, and their one at Muchmore's tonight with Daytona and Hearsay & Hyperbole isn't happening either.

John Legend's show at Cushman & Wakefield Theater at Barclay's Center was postponed a while back for non-Sandy reasons.

Joshua Radin & A Fine Frenzy at Best Buy Theater has been postponed.

Lee DeWyze at Highline Ballroom has been canceled.

The Rock Shop is open, but tonight's show has been canceled.

Tonight's shows at The Stone are cancelled.

As you may remember, Jimmy Kimmel Live was to be live from Brooklyn this week. The rest of the week my happen but tonight will not. Tweets Jimmy, "Though it pains us to do it, JKLfrom #Brooklyn tonight is cancelled. I'm disappointed too, but we want you to be safe."

Tonight's Reverend Vince Anderson and His Love Choir show at Union Pool has been canceled.

Arlene's Grocery is closed.
Iridium Jazz is closed
Both the Chelsea and East Village UCB Theatres are closed.

Tonight's Schnick or Treat comedy show at Littlefield has been postponed to 11/4.

Nitehawk Cinema in Williamsburg is closed.