"heading to NYC to play the PORTLANDIA premiere!" - The Thermals

"OMG just saw Carrie Brownstein at the airport SHE'S ON OUR FLIGHT!!!" - The Thermals

"whoa there's a lot of sluts on this flight. c u in NYC!" - The Thermals

"good flight. I finally learned what the mile high club is. I always thought it meant getting stoned in Denver" - The Thermals 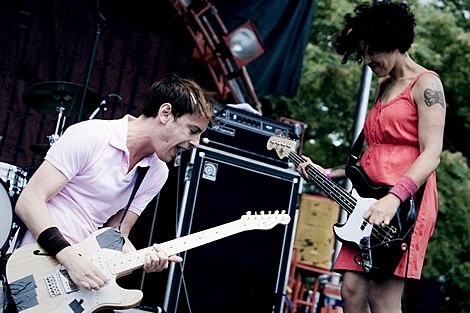 "Allow us to introduce you (against their wishes) to Forbidden Friends!

Forbidden Friends is part secret society, part torrid love affair. The kind of experience you cherish, yet would kill to keep secret. Well as of this moment the secret is OUT. You can wash your dirty sheets as many times as you want, but once the world knows all your steamy indiscretions there's no going back! Might as well post all your (formerly) deep, dark secrets as your next status update. Forbidden Friends may have hoped to keep their little club private, but it's too late now! The gossips have spoken and won. Let's tell EVERYBODY. Please help us!

Forbidden Friends is a new band from Hutch Harris, lead singer and mastermind of The Thermals, Portland's last great post-pop-punk-power trio. Initially conceived as a way for lovers to send hidden messages in plain view (isn't there an app for that?), Forbidden Friends is now a legitimate, public work of art. The band is at once old fashioned (acoustic instruments, mono mixes), forward thinking (reference-less, incredibly danceable), and timeless (classic lyrical themes of love and desire.)

Forbidden Friends will release their debut single, "Tiny Hands", on the Kill Rock Stars label March 15, 2011, on vinyl (7") and digital download. It is accompanied by the b-side "For You". Harris played the basic instruments (drums, guitar, bass, vocals), and was assisted in the studio by his fellow Thermals Kathy Foster and Westin Glass, as well as Michael Lerner of Telekinesis, on percussion. Both songs are truly upbeat and fun, and are the perfect introduction to this exciting new band." [Kill Rock Stars]

Forbidden Friends have no upcoming live dates, but (not counting the private party that Hutch has been tweeting about - see the top of this post) The Thermals do, as do Portlandia guest stars and Thermals' Kill Rock Stars label-mates Corin Tucker and the Decemberists.

Portlandia, starring Fred Armisen and Carrie Brownstein, premieres on Friday, January 21, 2011 at 10:30 PM ET/PT on IFC, but you can watch it now in the video embedded below.

The Thermals, after the Portlandia party (1/19), have some dates scheduled on the west coast followed by a European tour with The Coathangers. Their list of dates, and Carrie's new band Wild Flag's updated set of dates, and pretty much every upcoming Kill Rock Stars-artist tour date currently listed by the label, is below...