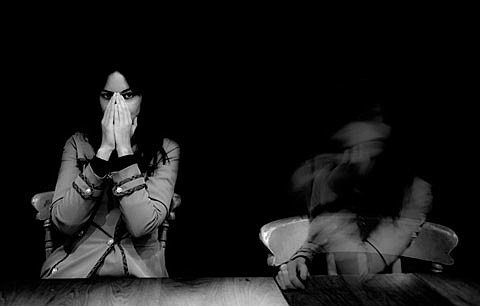 At first glance, Swedish duo I Break Horses (aka Maria Lindén and Fredrick Balck), who released their debut album, Hearts, earlier this year, do not give you what you expect to hear. They share their band name with a Smog song title and released their album on Bella Union, whose Fleet Foxes-referencing 2009 sampler 'White Winter Hymnals' put a large emphasis on the label's folk artists, which makes me almost feel the need to constantly remind myself that this is not a folk album. In fact, it's far from it. It's an electronic take on shoegazey dream pop (which is, of course, embraced by the Bella Union founders, both of whom were members of Cocteau Twins) with huge melodies suppressed by tiny arrangements.

Yet, after a minute of the looping synth on album opener "Winter Beats," Maria Lindén's breathy voice kicks in and is soon followed by exactly the kind of beats you want to hear when you're staring at the snow-tipped trees outside your bedroom window in mid-winter. After the dynamic shifts of that song die down and that same looping synth leads into the album's second track, "Hearts," the duo resorts to hiding under shoegaze gloss for the remainder of most of the album, only coming up for few more defining pop moments, and it's that mix of sounds which makes Hearts such a compelling listen. On "Pulse," the duo sound as big as this album allows them to, with Maria delivering her most confident melodies over a pulsating bass drum.

I Break Horses have only begun playing shows in the last month, and have not played at all in the US yet. But that will change when they open for M83 at Terminal 5 on May 10. The show should make for a good pairing, considering I Break Horses share M83's electronic interpretation of shoegaze and dream pop. Tickets go on sale Friday (12/9) at noon and AmEx presale begins Wednesday (12/7) at noon. There are no other US shows to report yet UPDATE: Full tour announced and listed below.... but hopefully they'll also grace us with a performance somewhere smaller than Terminal 5 while they're here.

You can download "Hearts" and "Winter Beats" above and stream them both below, along with the video for the latter. Also below is a Star Slinger remix of "Load Your Eyes."