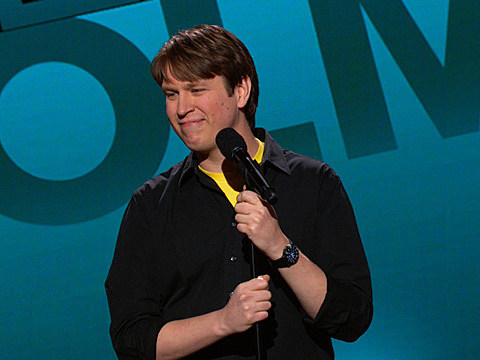 As we reported in February 2010, but I completely forgot until I saw this Wall Street Journal article today...

"Stand-up comedian Pete Holmes had an audience of more than 100 million people last month. As the snarky voice of the stock-trading baby in commercials for the online trading site E*Trade, Mr. Holmes and his two recent Super Bowl spots were part of the most-watched TV event in U.S. history.

Normally, when Mr. Holmes performs, it's for audiences of hundreds--gigs at New York comedy clubs, colleges or the occasional taping of a Comedy Central special. He doesn't do finance.

"I know about as much about investing and banking as an actual baby," he says." [The Funny People Behind the Famous Ads]

We used to see a lot more of Pete Holmes when he lived in NYC, but as his Facebook page points out, he now lives in LA where he performs at the What's Up Tiger Lily? Comedy Show on 2/21 (he moved there in 2010 to be a writer for NBC's Outsourced).

Pete Holmes performed at Comix in NYC on March 11th, 2010 (and other times). Comix went out of business less than one year later.

Pete's friend Mike Birbiglia (I mean they're probably friends) has a new off-Broadway (I think that's considered off-Broadway) show opening at Barrow Street Theatre and tickets are on sale.

A video of Pete performing at Comix in 2009 can be watched below...