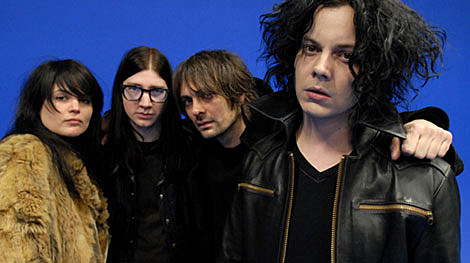 If you didn't hear, Jack White is now in a band called The Dead Weather....

In addition to frontman White, who drums and sings in the band, the supergroup quartet includes vocalist Alison Mosshart of U.K. outfit The Kills; guitarist Dean Fertita of Queens of the Stone Age; and bass player Jack Lawrence, one of White's fellow Raconteurs.

The Dead Weather made their performance debut in Nashville last night in front of an invitation-only crowd of 150 fans, insiders and friends, including Sheryl Crow, Martina McBride and fellow White Striper Meg White.

The 20-minute show took place at the headquarters of the White-founded label Third Man Records, a building designed to serve as a one-stop shop for rockers, housing a record store, photo studio and stage.

"This band is the first project to come out of this new system, which is our new studio in town and this building," White told the crowd before the gig.

The band's debut single, "Hang You From the Heavens," is already available for download on iTunes. Their 11-song debut album, Horehound, will consist of 10 original tracks and a cover of Bob Dylan's "New Pony."

It's set for release on White's Third Man label in June. [E]

Thanks to all who emailed. Video below...