Pitchfork announced their top fifty singles of 2004 today. Norway's pop princess, Annie, dominated the list by landing postions 11 & 1. I thought I would probably surprise some people when Anniemal appeared on my forthcoming 'best of 2004' list, but figured this was a better time to come out of the Annie cloest.

When I first heard of Annie, I didn't really pay attention. The second time I started to take notice. Finally on November 8th I got a copy. I liked and recognized 'The Greatest Hit' from many a dance floor, but after listening to the album a few times, I put it aside for a while.

"In 1999 she released the single "The Greatest Hit", a dance pop song based on a loop from Madonna's "Everobody" that became an instant underground hit. Before that happened she played in an indie rock band called Suitcase, which she left because the other members wanted to make trip hop." (MTVe) 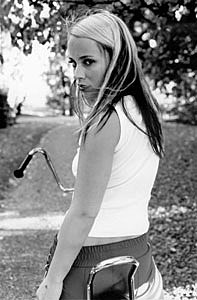 Then I started noticing new Annie tracks being played all over NYC, and I was dancing to them. Then I got my (free) iPod a few weeks ago. I threw Annie on there and suddenly I was dancing on subway platforms. It's currently one of my favorite albums.

It's a Trap reports that Anniemal has been nominated for Norway's Alarm Prize in the Pop category.

I can't read Spanish, but with a title like "Anniemal / Arcade Fire," I'm sure I like whatever this says.

I'm not the only one who agrees with Pitchfork.