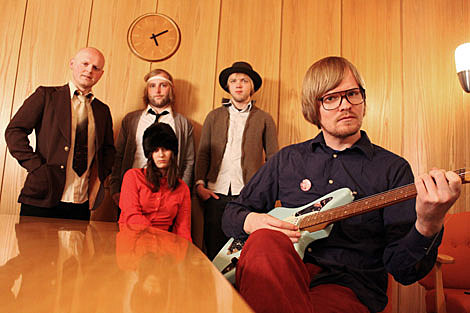 Oslo, Norway's I Was a King are headed to America for a fairly extensive US tour, including two stops in NYC: May 30 at Mercury Lounge (with UK's great The Wave Pictures) and May 31 at Union Hall. The band's self-titled debut came out earlier this month via The Control Group, who have released albums by The Figurines and El Perro Del Mar.

For all intents and purposes, I Was A King are a duo: Frode Strømstad, who's a Norwegian indie gadabout and owner of Hype City Records) and Anne Lise Frøkedal (who also fronts her own excellent band, Harrys Gym). The album was actually made in Brooklyn, at the Ladybug Transistor's Marlborough Farms studio with big help from head Ladybug Gary Olsen and fellow Norwegian Emil Nikolaisen of Serena Maneesh. Sufjan Stevens helps out on a few tracks, as does Danielson. Live, the band is fleshed out to a five-piece, including ex-Serena Maneesh member Håvard Krogedal on bass.

If you like '60s pysch pop, '90s psych pop (Elephant 6), Dinosaur Jr. and Teenage Fanclub, chances are you're going to like I Was a King. Teenage Fanclub, actually, are punnily namechecked on the band's first single, "Norman Bleik," which you can download at the top of this post. Video of them performing the song on Norwegian television and all tour dates below...