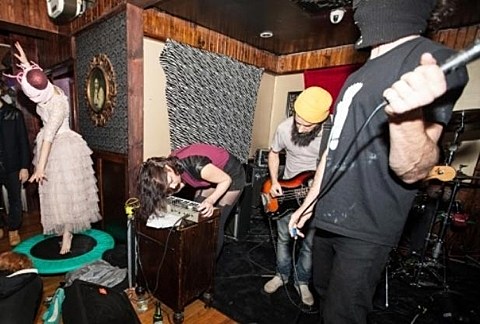 The first time I saw Ice Balloons, I thought they were way too off the wall to ever gain popularity outside of basement shows and Rubulad parties. But is that such a bad thing? This lurching, fuzzed-out act--fronted, naturally, by a half-man, half-fly creature--is just the thing to make you feel you've stepped into another dimension, especially when accompanied by B.A. Miale's trippy projections. [New York Observer - 'Best Bands of 2013']

NYC's Ice Balloons count TV on the Radio's Kyp Malone and Wild Yaks' Rob Bryn as members (along with Sean Powell, Dan Scinta, Giselle Reiber, and B.A. Miale) and together they make a truly weird blend of psychedelic synths, art punk, noise, and other eccentric sounds. They're currently on the road for their first-ever tour with Kyp and Rob providing solo sets as support on select dates. The tour includes a NYC show on Thursday (3/13) at Death by Audio, and at that one, both Kyp and Rob will open. Likeminded Brooklyn trio Alien Trilogy are on the DbA bill as well. $7 at the door gets you in. All dates are listed below.

In 2013, they released their debut self-titled album, which you can stream, along with videos of two of its tracks, and the list of dates, below...