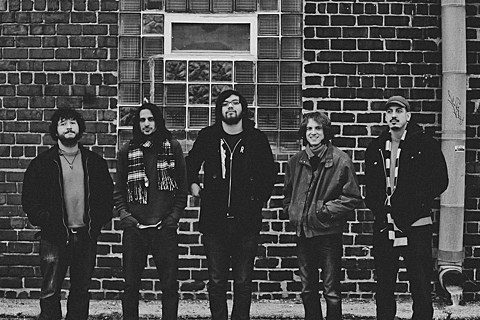 Quad Cities screamo band Ice Hockey are releasing a new album, Wavefuncton Collapse, this February via Texas Is Funny (pre-order), and its new single "Solar Myths And Autumn" is premiering in this post. It starts off sounding straight out of the '90s screamo scene, but then the intensity lightens up a bit and noodley "emo revival" guitars come in to close the song. It's good stuff, as you can hear below. Here's what the band said about the new album and this song specifically:

This was written in a very tumultuous time for the band. A few of the members left and it was just guitar and drums for a month or so. The majority of the material was written then. We had just gotten back from a short tour where we played with bands like The Reptilian and Alta and we were looking to gain a little more subtlety and maturity in our songs. 3 of the songs were written within the first few months of the band and the rest were written right before we left for our first east coast tour.

["Solar Myths and Autumn"] is about growing up and not realizing that you grew up. Like one day you are 12 and everything is ahead of you and then you wake up one day and you are in your mid-20s and somehow in your head you feel like nothing has changed. Time sneaks up on you. You forget to do so much.

Ice Hockey are also on tour, and though there's no NYC date, they do have a nearby Long Island show happening January 17 at Comiskey Park Bar. All dates are listed, with the new song, below...