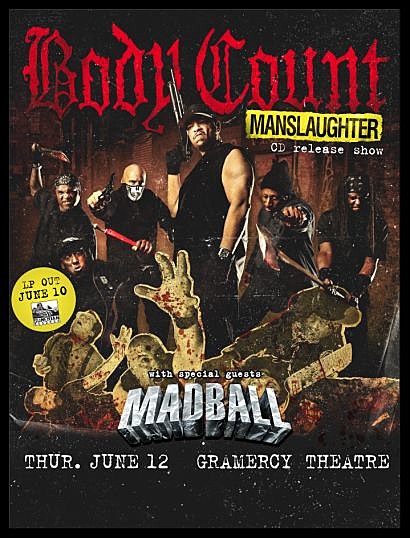 The "legendary" Body Count, Ice-T's rap metal group known primarily for upsetting old white men in the early '90s, are releasing a new record. Titled Manslaughter, the LP will hit the streets on June 10 and will surely continue mining the same thought-provoking material as previous treatises like "Evil Dick," a song about Ice-T's evil dick. To ring in the event, Body Count will be playing a record release show in New York City The Gramercy Theatre on June 12. Tickets go on sale Friday (5/16), we promise the NSA isn't tracking your click.) Madball, the legendary NYHC outfit that can rightfully proceed their name with 'legendary,' will open the show, as will Wisdom in Chains. Apologies to most of you for burying the lede: There is a Madball show.

Body Count's career has been interesting, not so much for their musical contributions (HI, THERE IS A SONG NAMED "EVIL DICK"), but for the controversy they've inspired. "Cop Killer" is their claim to fame, a police protest song that landed the outfit in a heap of trouble, earning condemnations from various police organizations, George Bush and Dan Quayle, the PRMC, and even Charlton Heston, who held the lyrics in his cold dead hands and read them aloud during a Time-Warner shareholders meeting. The track was subsequently pulled from Body Count's '92 eponymous debut, partly in reaction to the LA Riots that exploded following the acquittal of officers involved in the Rodney King beating. Millennials, I'll wait while you Wikipedia all of this.

Granted, the music doesn't hold up and most of the contemporary news blurbs and reviews read like a '90s version of the gas leak year. (For instance, Ice-T was accused of "selling out," which doesn't really read as inflammatory unless you remember when Ice-T was kind of awesome.) But. . .the project has a certain charm in the time capsule sense, along with the reams of oddball bar trivia tied to it. (Black Sabbath - Forbidden: Ice-T appears on the album, Body Count guitarist Ernie C. produced it. Yes, that Black Sabbath.) Not to mention, Ice-T's acting career (if they segue songs with the Law & Order drop, worth every penny) and reality show antics means this one-off show could be, well, kind of fun. At the very least, if you're an owner of the original Body Count CD†that's still bedecked in foot-long cardboard (this was a thing), now might be the time to sell.

Samples of Body Count's work and a couple golden oldies from Ice-T appear below.