Lower at Chaos in Tejas 2013 (more by Sarah Frankie Linder) 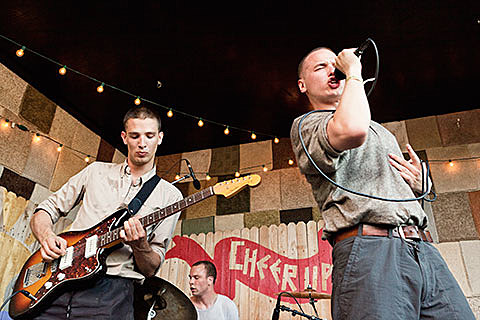 NYC's Cult of Youth just shared a stage with Skinny Puppy at Webster Hall for someone's idea of a happy Valentine's Day, but if you were preoccupied with a more traditional celebration, the band will be playing the previously mentioned Nothing Changes party this Wednesday (2/19) with Damien Dubrovnik and Helm. As usual, things will get started late (midnight-ish) at Home Sweet Home.

Damien Dubrovnik is a project from Loke Rahbek and Christian Stadsgaard, the duo behind the Copenhagen label Posh Isolation. Posh Isolation is putting on a two day fest out in Los Angeles called "13 Torches For A Burn" on May 16 & 17 at The Church on York that, in addition to label staples like Lust for Youth and Sexdrome and alums Iceage, will feature performances by acts that make it stateside less frequently (if ever), including Puce Mary and Age Coin. The show is being billed as Sexdrome's last-ever show, so get it while it's hot if you live in LA. Danish punks Lower will be there too, and tickets for both days and two-day passes are on sale now.

Virile Games, who is playing Nothing Changes on 2/26 with Withdrawal Method, just put out an EP titled Wounded Laurel (a reissue of an earlier double cassette) on Hospital Productions. A month and change later, Virile Games will team up with local black metal-tinged punk favs Raspberry Bulbs, Anxiety Hammer and DJ Anthony Pappalardo for a show at Baby's All Right on 3/29. Tickets for that show are on sale.

"13 Torches For A Burn" poster and lineup below... 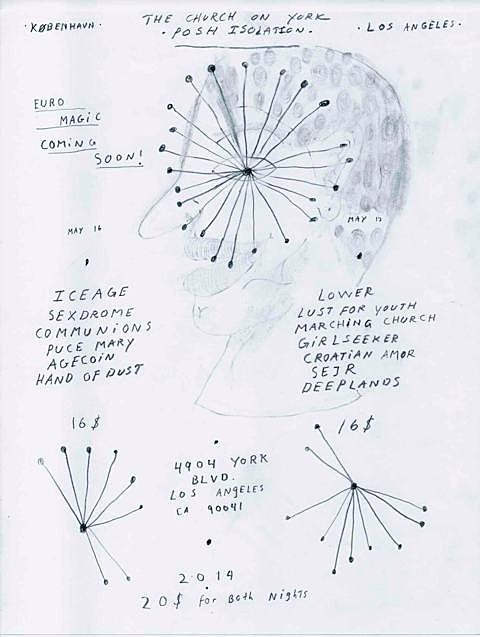