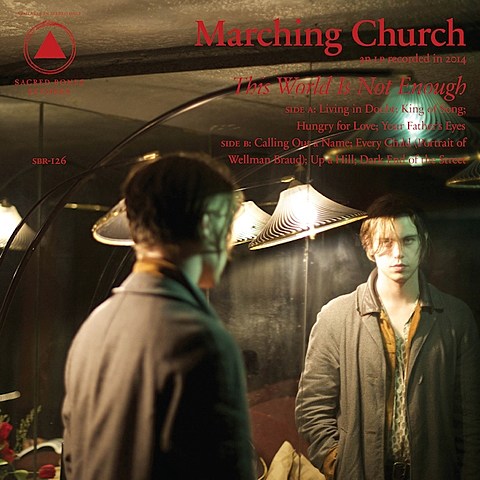 Iceage singer Elias Bender Ronnefelt also has a solo project called Marching Church, which he recently turned into a full band with members of Lower, Puce Mary, Choir of Young Believers, and Hand of Dust. He put out a 7" on Copenhagen label Posh Isolation in 2012, and now he's following it with his debut full length, This World Is Not Enough, which comes out on March 30 via that same label in Europe, and a day later via Sacred Bones in the rest of the world. The first single, "Hungry For Love," has Elias with that same sense of dark songwriting and exasperated vocals that he uses in Iceage. Check it out, along with 2012's "Throughout the Borders," below.

Marching Church also has a few US dates announced for the spring, including a Brooklyn show at secret location on April 3 with Coil/Psychic TV's Drew McDowall and April 4 at Acheron with Cheena (who also play NY's Alright). Tickets for those shows go on sale Friday (2/13) at 10 AM and noon, respectively.

All dates are listed, with the song streams and LP tracklist, below...

Tracklist:
1 Living in Doubt
2 King of Song
3 Hungry for Love
4 Your Father's Eyes
5 Calling Out a Name
6 Every Child (Portrait of Wellman Braud)
7 Up a Hill
8 Dark End of the Street