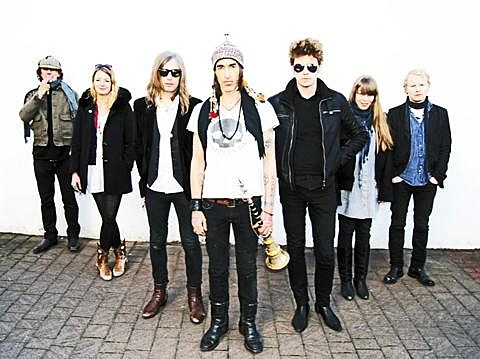 Did you have any musical ambitions prior to this?

Noni Dead: When I was much younger living in Glasgow I was thinking it would be nice to start a band and make music, but I have never learned to play instruments. The first time in the studio was with Anton on the Golden Frost. I went into the studio and did a few words, and then when Brian Jonestown played at Glastonbury I went onstage with them.

How did that become 'Dead Mantra' and Dead Skeletons?

ND: With 'Dead Mantra', I was doing an installation in the art museum in Reykjavik in 2008, and I wanted to bring the Dead Concept further, to use other kinds of art like music.

I asked Henrik if he could do a Dead Mantra song with the slogan 'He who fears death cannot enjoy life'. For me it was a spiritual battle song, because I have been HIV positive for 20 years, and the Dead Concept has grown out of that experience, my fear of death. I thought it would be great to do a dead song.

When I put the song on it is like I am going to war, I am beating the virus. I had Hepatitis C and I beat it on my own. For me there is a whole war, a spiritual, nuclear battle inside me. It is the song I want to hear when I go to meet my maker. It tells me not to give up, and to cure myself. It's my meditation song, and I love rock & roll. - [Quietus]

Reykjavik's Dead Skeletons cast a gloomy (yet life-affirming) shadow on their brand of psych rock with singer Nonni Dead at times in the Jim Morrisson/Ian Astbury school of bellowing. Nonni formed Dead Skeletons in the late-'00s and their most recent release was the "Budda Christ" 12" that came out back in December. You can stream the title track below along with some other material from the band.

Dead Skeletons are coming over for Austin Psych Fest and will play a few other American shows while here, including two in NYC: May 8 at Glasslands (tickets) with Night Beats and Cosmonauts, and May 9 at Mercury Lounge (tickets). All tour dates are listed below...