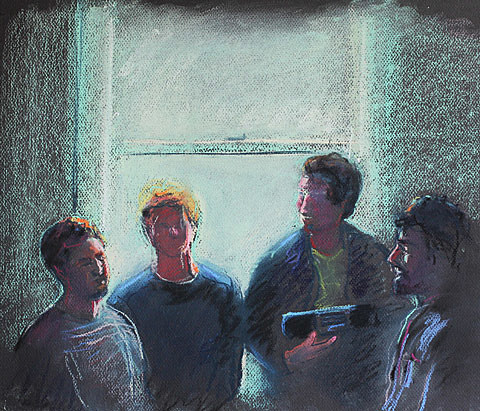 We've mentioned Brooklyn's Icewater a few times but if you're unfamiliar, the four-piece band, who you may have seen as Eleanor Friedberger's backing band, released their jangly, poppy debut album, Collector's Edition last year. They've just made a video (as in they directed it) for LP track "Bite Fresh Air" which traps the band in some sort of cube. Unlike General Zod's time in the Phantom Zone, Icewater seem to be enjoying themselves in there. Watch the video, premiering in this post, below.

Icewater recently spent the month of April recording their second album in Virginia at White Star Sound with producer and engineer Adam Smith. The album, titled Cardinal, is due out later this year. You can probably hear some of those new songs at their East Coast shows in May. They play Brooklyn's Union Pool on Thursday (5/1) with See Through and Cassandra Jenkins, and then at Baby's All Right on May 22 as part of the rescheduled TEEN record release party. Tickets to the TEEN show are on sale.

In between those Brooklyn shows, Icewater have a couple gigs in Vermont. All dates are listed, along with the new video and a stream of their debut album, below...