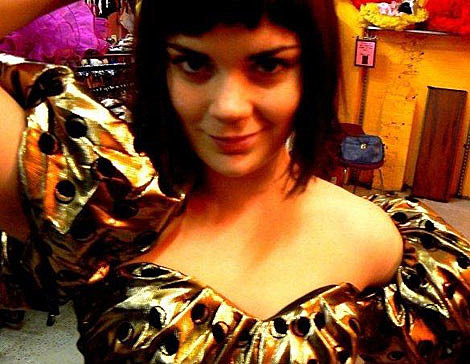 Before I get to this week's picks [Week in Indie], the biggest news for me is that Norwegian spitfire Ida Maria will be in NYC for two shows in January: Mercury Lounge on 1/15 and Union Hall on 1/16. If you're unfamiliar with her and associate Norway with twee indiepop, just know Ida is a force of nature. I saw her during CMJ 2007 and wrote this:

"When she strapped on the guitar and opened her mouth, she transformed into a whirling, wailing little powerhouse...pouring every ounce of energy and emotion into her songs to the point where she seemed lost in them some of the time. Mikes were knocked over, drums stumbled into and more than once she dropped to the floor onto her back where she continued to sing and play guitar."

It was one of the best shows I saw that year. She was supposed to back again for SXSW this year, but ended up cancelling.

Ida released her debut album, Fortress Round My Heart, in Scandinavia and the UK earlier this year. It's passionate, funny, and feels very alive. There are a lot of songs about whiskey. (Heart on a Stick said it was more Irish than Norwegian/Swedish.) She's pretty much won over the entire UK music press, and is now, hopefully, setting her sights on the U.S. Hopefully these January shows means the album will be coming out over here soon. The Union Hall show is already on sale (Eight bucks!), and the Mercury Lounge show goes onsale Thursday (12/11) at Noon. Don't say nobody told you about it.

There are a few YouTube videos, and all tour dates, below...

Ida Maria - "I Like You So Much Better When You're Naked"