Ida Maria in Norway this month (via) 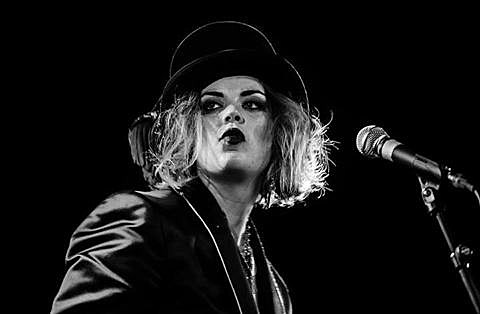 It has been a long time since we heard from Norwegian singer Ida Maria, who blew in like a tornado in 2008 with her debut album, Fortress Round My Heart, and electrifying, chaotic live shows in 2009 -- and subsequent erratic behavior, cancellations and onstage breakdowns. A second, very overproduced album, Katla, was snuck out in 2010 and then she all but disappeared.

Ida Maria's got a new album, Love Conquers All, which was announced via Twitter, has only been released digitally through Norwegian magazine Eno and can be purchased here. Not much seems to have been said of the album -- it's not on her official website -- but whatever the official status of it is, it's a nice return to the stripped down sound of her debut. You can stream the whole thing, via YouTube, below. Clearly it had been a rough couple of years for Maria as she writes on Cashmusic:

That's what this journey has been about. Finding myself again, picking up the pieces after a shipwreck with a ship where I was the only captain.

The storm that came, it came good, and it aimed sweet. The storm's only job was to take me down, and I was on my own. My water-borne vessel was improvised, put together by rubble I had gathered throughout the years. I had sailed for centuries. And I still was to sail further. 'Cause I begged, and I begged hard. The universe served me with a one last dance. They took me with an ambulance, morning of May 7th, with life-threatening alcohol poisoning. When I write this, I have been clean and sober since May 8, 2012. I don't wish addiction on my worst enemy. God bless you all.

Now on a better path, Ida Maria (who lives in Los Angeles these days), seems ready to start playing shows again. She'll be in NYC next month, playing one of the first shows at Rough Trade NYC, on December 4 and while here she'll also play Mercury Lounge the day before (12/3). Tickets to both NYC shows go on sale Friday (11/8) at noon with a AmEx presale happening for Mercury Lounge starting Wednesday (11/6) at noon. No other dates have been announced yet.

Love Conquers All streams below...

Ida Maria - Will We Ever Be Friends Again?