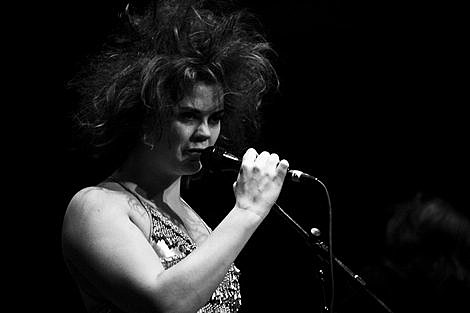 Some observations on Ida (pronounced "eee-DA") Maria's set on Sunday night at The Bell House.

1) Ida Maria stuffed smokeless tobacco into her mouth twice during the set.
2) She confessed to drinking champagne before the show but waited until the last song, "Oh My God," to pour water over her head. [video below]
...
4) The drummer played something suspiciously like a drum solo before "I Like You So Much Better When You're Naked." It was really good.
...
6) I could probably watch Ida Maria scream for about fifteen minutes before getting bored. Actual words not necessary.

She's coming back this summer with shows scattered around the country in July and August including one taking place at Maxwell's on Thursday, August 13th with opener Franz Nicolay. Tickets are on sale now.

The above mentioned video, video blogs from Ida's June tour, and all tour dates, below...