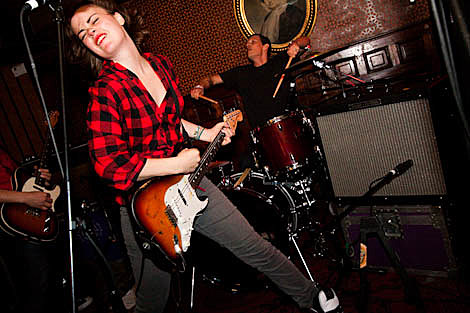 I wanted to re-release my album, the way I wanted it to be.

I have designed the artwork, added three new songs, and changed the track listing.

Now it sounds, looks and feels like I want it to feel, and I am so excited again. 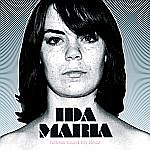 The story behind this cover is a story similar to a homebaked applecake.

You take what you have in your kitchen and experiment a little and hold tumbs that no one will notice you kinda forgot the recipe.

And then it turns out tasting good as hell and nobody can ever make it again.

My drummer Olle is a photographer (!) and has shot the genius cover photo in his apartment in Stockholm, with use of just the light that was there. Lamps in the livingroom, and pocket flashlight.

Fortress Round My Heart, Ida Maria's 2008 debut, is coming out in the US, digitally on March 24th and on CD, April 14th, on Universal's Mercury Records. The US release will sport a new cover and re-arranged track list, but won't include the bonus tracks described above (though new song "In the End" will replace previous closer "See Me Through").

Ida Maria is one of the many scheduled to be at SXSW this week. She was/is supposed to play KCRW's Showcase at Buffalo Billiards, a show at Maggie Mae's , and is on the bill of Perez Hilton's "One Night in Austin" party on Saturday.

"One Night in Austin" will feature Yelle, Solange, Lady Sovereign, Margaret Cho, Ladyhawke, Little Boots, Ida Maria and Thunderheist, plus "a very special Surprise Musical Performance." No word on who: "Not Tori Amos [but] one of our FAVORITEST acts of all time!!!!!!" [RSVP for the party].

UPDATE: Ida Maria never made it to her official SXSW showcases...

I don't think Ida Maria played either Maggie Mae's or Buffalo Billiards. I wanted to see her play while I am down here, but both nights, she was removed from the official sxsw.com website. She was replaced with Zee Avi on wednesday and with Val Emmich yesterday. I hope she actually plays the perez show. Looking forward to seeing her at MHOW regardless" [Ashok]

EW confirms that, "...Zee Avi, a tiny girl with a warm smile filled the lonesome last spot at the KCRW showcase on Wednesday night. It was huge opportunity for the newcomer -- her self-titled debut will be out May 19 -- filling in for Norwegian rocker chick/hype magnet Ida Maria, who was reportedly stuck in U.S. customs."

After the festival (if she makes it at all), Ida Maria is touring with Glasvegas through March, including a March 28th show at Music Hall of Williamsburg (on sale ) and a March 30th one at Webster Hall (on sale). Ida Maria also has a scheduled appearance at Coachella Festival on April 18th.

All Ida Maria tour dates and the "Oh My God" video below...