'New York City concert was hotter than a whore in heat! So amazing!' - Perez Hilton

'Ida Maria appeared to be drunk and phoning it in' in DC, Sep 12 (Francis Chung) 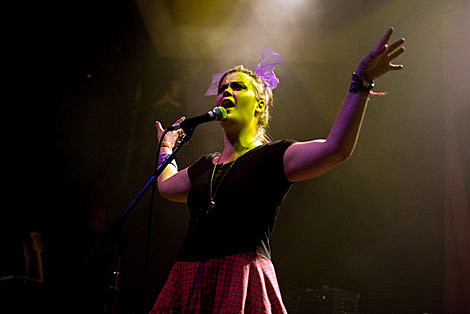 "So, you'd assume that the self-proclaimed "queen of all media" would have been tweeting the crap out of Ida Maria walking off stage at her Boston show on Monday night. Perhaps a few scathing blog posts on his 20-million-hits-per-day web site and maybe some speculation -- totally unwarranted and without any actual, factual reporting -- that drugs and/or alcohol are to blame for the rising star's troubled performance.

But, no. Not one word was uttered, tweeted, typed or mentioned on any of the multiple social-networking sites to which Perez Hilton regularly contributes and certainly nothing on his astronomically famous web site, PerezHilton.com.

The gossip blogger and frenemy to the stars, has recently been toting his "Perez Presents" tour all over the internet, giving him even further bragging rights (in the past, Perez has taken credit for the successes of Lady GaGa and Mika) for "discovering" new talents Ladyhawke, FrankMusik, Eric Hutchinson, Sliimy, Semi Precious Weapons, and Ida Maria.

Despite the fact that most, if not all of the artists have been touring their home countries -- most artists are from overseas -- for the past year, and anyone who reads any sort of music news would know some of their names, Perez continues to promote his gig as a musical experience worth the $30plus price tag, because it will expose you to a whole "new" world or music.

I'd beg to differ. And I'm sure the mere 250 people who attended the event at the House of Blues [in Boston on Monday, September 14th] would agree, especially once co-headliner Ida Maria had a melt-down during song one-and-a-half, rendering her unable to perform the rest of her set.

The Norwegian rocker seemed less-than-impressed by the dwindling crowd as she took the stage (the three-story music venue can hold more than 2,400 people). She pouted her way through her first tune, refusing to sing the last two lines on the song, and opting, instead, to have a pow-wow with her guitarist, who pleaded with her to continue the performance under hushed mics.

As she led into her second song, the singer put down her own guitar and stood facing the audience folding her arms with an un-entertained, unenthusiastic, "I could care less" look written all over her face, before storming off mid-song leaving her band clueless. After a brief period of confusion, the stage managers reeled out a screen from which the audience could watch music videos. Already angry concert goers booed as Kanye graced the screen. Management were quick to replace his video with Janet, Madonna and of course, Taylor Swift.

Later, Maria would return from her fit back stage to apologize in broken English..." [Boston Daily Free Press]

That interesting, but somewhat unsympathetic article, fails to mention that Ida was crying, and that when she returned, she emotionally finished "Keep Me Warm" before apologizing "in broken English" and then finally leaving the stage for the last time. Video of the incident below.

"Next up was Ida Maria, who played arguably the most disappointing set of the night, if only because she had set the bar high with the scintillating performance she put on at the Black Cat last March. Opening with a couple of loose, bluesy jams, the Norwegian indie-rocker appeared to be somewhat off-kilter and (as Perez would later suggest) fairly intoxicated, slurring lyrics and botching guitar parts while generally lacking the verve that has distinguished her recordings and previous live shows. After Ida Maria closed her set with "I Like You So Much Better When You're Naked," Hilton took the mic and announced that he was "about to get as drunk as that bitch," adding that "Even though she was a train wreck, she was still awesome!" (It's always helpful to have a professional on hand to provide instant spin.)" [DCist]

The tour went from DC to Philly to Boston (described above) to, after a night off, NYC last night (9/16). Ida Maria wasn't there. Still no tweets from Perez - just the sign on the door. She was replaced by Kat DeLuna. Little Boots also played an unannounced set, but that would have happened even if Ida was there.

Video from the Boston show

"Ida Maria walks silently from the stage in the middle of the second song in her set on Sept. 14, 2009 at the House of Blues in Boston, MA leaving the band to finish the song without her. After a very long period of time she reappears while crying to sing "Keep Me Warm". Unable to continue, she apologizes and leaves the stage for the evening leaving the crowd wanting so much more. (But the performance of her final song left our jaws on the ground. It was extremely intense and incredible... I hope that whatever is troubling her goes away STAT and she comes back to Boston!)