photo: Ides of Gemini at Webster Hall in 2013 (more by Lukas Hodge) 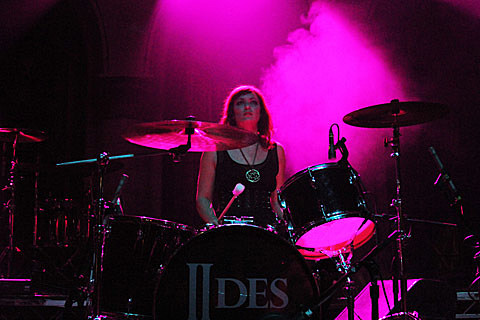 Doom trio Ides of Gemini were to have played four NYC shows this week -- three opening for The Mountain Goats (tonight, 4/9, at Webster and 4/11-12 at City Winery) and a headlining show on Friday (4/10) at Saint Vitus. Unfortunately, they've cancelled all four. They write:

Due to Kelly's injury, we will be unable to play the scheduled NYC shows with the the Mountain Goats at Webster Hall (tonight) & the City Winery (Saturday & Sunday) - as well as our scheduled show at Saint Vitus Bar (Friday) with Kosmodemonic & Steve Brodsky. With a few days of rest and a little luck, we're hoping we can rejoin the Mountain Goats tour in Philly on Monday night.

Bummer. Feel better Kelly, and hopefully they'll get back on the road sooner than later.

Tonight's Mountain Goats show at Webster Hall will instead have Emil Amos' band Holy Sons opening. No replacement has been announced for the City Winery shows. All three are sold out.