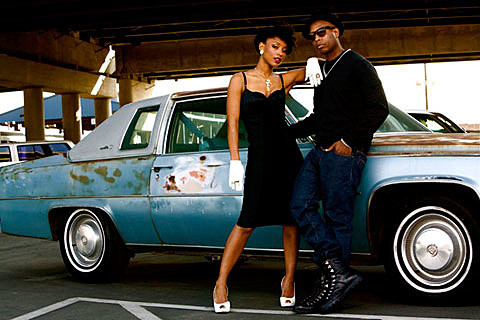 As the first of three BrooklynVegan not-CMJ DAY PARTIES is already underway, I'm happy to announce that Idle Warship will be playing the free BrooklynVegan day party at Public Assembly on Saturday, 10/22, at 5pm! Full lineup TBA shortly

If you missed Idle Warship's free Restoration Rocks show (due to them not playing it), here's another chance! As their bio reads:

A collaboration between hip-hop luminary Talib Kweli and critically acclaimed soulful singer and songwriter Res, Idle Warship is a genre-bending musical project born out of sheer experimentation and unbridled creative expression. Idle Warship's free-thinking approach has always crossed over from the studio to the other end of the process - the delivery of the music. After releasing free music across the web for the past four years, Idle Warship unveiled "System Addict," a track off Habits of the Heart, on the now wildly-popular social music site Turntable.fm just weeks after its launch. Talib Kweli even received Turntable.fm's very first verified account.

That album, not out until November 1st (via Blacksmith/Element 9/Fontana), is now streaming exclusively on Spotify who are also BrooklynVegan's digital music service partner for all of our CMJ events.