IDLES short North American tour with Preoccupations wrapped up on Thursday at NYC's Terminal 5 and things really went out with a bang. They lit up the room from the moment they stepped on stage til the moment the last notes rang out, with the crowd matching pace, jumping and screaming along to every song while crowd surfers swarmed towards the stage in a steady stream.

In some ways it's hard to believe just a year and a half ago IDLES played a room the size of Rough Trade, but with a vibe as positive as theirs is, and songs with such catchy hooks , positive vibe and lyrics that speak to universal human experiences (loss, addiction, pain, and the general chaos of the world), it really should come as no surprise they have been on a rapid ascent which has had them through NYC many times since 2017. It's clear "Joy As An Act of Resistance" isn't just the title of their latest album, it's a mindset, a call to action, and the way they live their lives. This spirit permeated the air throughout the night on Thursday

Singer Joe Talbot, remarking on the band's biggest headlining show ever, said that he saw it as it's not so much a feat that the band had achieved as a feat the fans achieved with them.  He commented on community often between songs, expressing how thankful they are that they get to travel the world and meet lots of community and that their hope is the fans will "show each other what love is and you can climb over that wall and party." And party they did with guitarists Mark Bowen and Lee Kiernan throwing themselves around on stage and spending a number of songs in (and on top of) the crowd, at one point parting them like the Red Sea.

While they have shared on their social media that they are working on a new album, they didn't tease any new tracks and solidly stuck to material from their first two records. (They do have a new live album, though.) Nor did they play an encore, but instead launched an all out frenzy during the final song "Rottweiler" with members of Preoccupations coming on stage for an extended frantic crash and bash on guitars, drums, anything handy to make a beautiful cacophony of noise to close out the night.

Check out pictures of the whole night in the gallery above, and IDLES' setlist and a few videos are below. 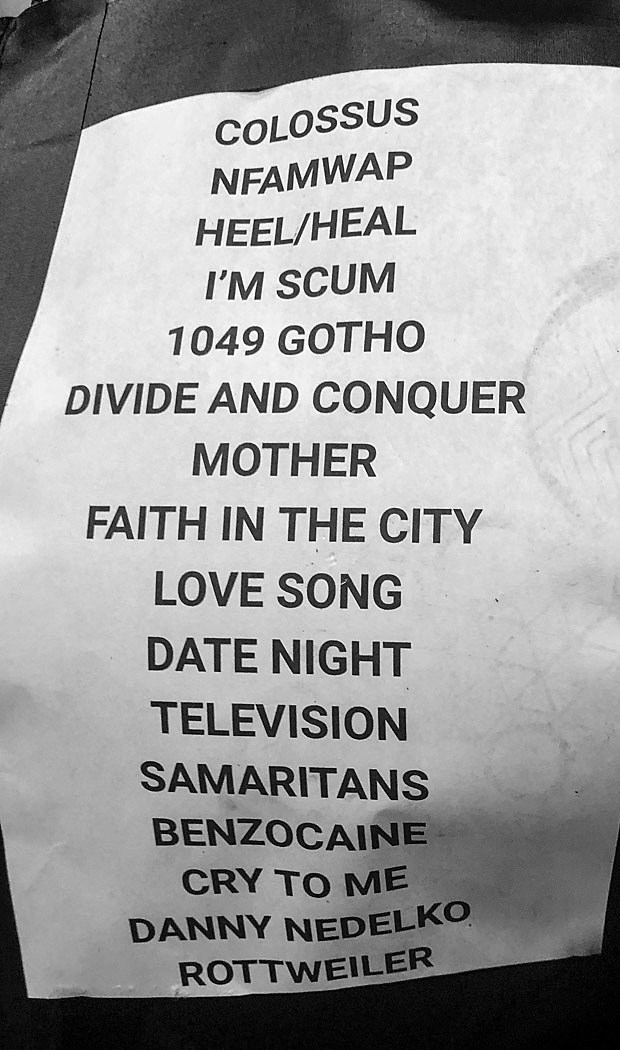