DOWNLOAD: Jim Walsh talked about it on WNYC (MP3) 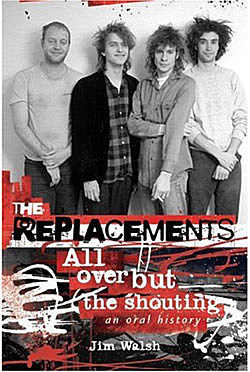 Their legend is entrenched in rock history: Three neighborhood friends form a band in a Minneapolis basement, recruit a 12-year-old brother to play bass, and become one of the most critically acclaimed rock acts of the 1980s. Along the way there's comedy, tragedy -- and a lot of beery folklore. Longtime Twin Cities music critic Jim Walsh joins us to share his oral history, "The Replacements: All Over But The Shouting." [WNYC]

One day I will read more, and when I do, I would like to read this book by Jim Walsh. Download Jim Walsh's WNYC interview above. Check out four more related events, below...

Interview with Lizz Winstead on "Shoot The Messenger"

Blender says "Let it Be" is the third greatest indie rock album of all time.