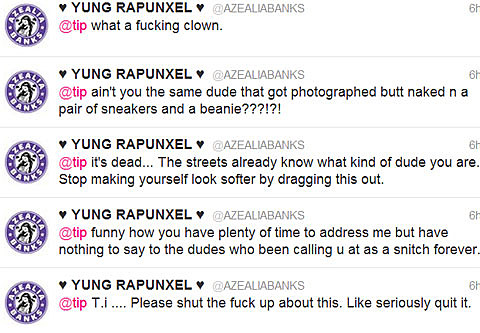 Is there anything more confusing than two up and coming, feuding female hip hop stars, both with the name "Azalea" (like the flower), but one is a last name and one is a first name spelled "Azealia"?

The latter just played her first two shows ever at Coachella and is now on her way back to NYC (the 212) to work with Missy Elliot (and she is very proud of that). Earlier today she was tweeting at T.I. (see above) for calling her feud with his Australian Grand Hustle signee Iggy Azalea "bitch shit," or some sexist shit like that.

Iggy Azalea is playing SOB's in NYC on May 17, right before she plays Bamboozle in NJ. Tickets for the NYC show are on sale.