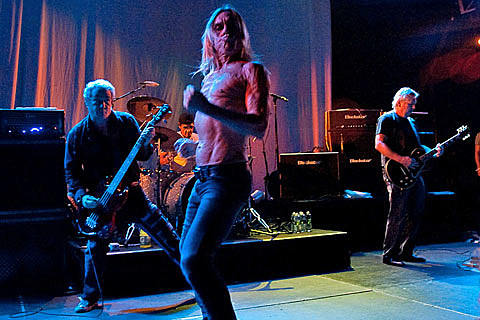 Like last year's teaming up of Neko Case and Nick Cave, HBO series 'True Blood' brought together two musicians to record a song for an episode, this time with Iggy Pop and Best Coast (who play Terminal 5 this month) singer Bethany Cosentino. While Neko and Nick put their spin on The Zombies' "She's Not There," Iggy and Bethany recorded a new song, co-written by 'True Blood' music supervisor Gary Calamar, called "Let's Boot and Rally." The song was written for the episode, "Boot and Rally," which airs this Sunday (7/8). The two sound pretty great together, and you can hear it for yourself by streaming the song at KCRW or purchasing it on iTunes. Here's what Gary had to say about the collaboration:

Now, I have always been a weekend songwriter. I can bang out a handful of chords and I must say I've written a few stone classics over the years....in my mind anyway. Back at my office I break out my trusty rhyming dictionary and I start thumbing through it....mmm, one thing leads to another and I started getting, how you say, inspired. At this point I called my very talented friend and brilliant songwriter, James Combs and asked him to collaborate. We got down to business and came up with a song "Let's Boot and Rally". As many songwriters say, "the song just wrote itself", "I was just a vessel". That's what happened, kinda.

Meanwhile, to backtrack a little....Iggy Pop, or should I say Iggy's people, had reached out to me saying he was a True Blood fan and if any opportunities come up, to please keep Iggy in mind. What ? Music to my ears. We sent Iggy the demo of "LB&R". He loved it and said sign me up.

So, as I was listening to my favorite song this summer, "The Only Place" by Best Coast, and I thought maybe Bethany might like to join in the fun of "Let's Boot and Rally". Nah, she's too busy with her fabulous new album her great fashion line and being the cover girl for all the hip mags. What the heck (I don't talk dirty) I said. Why not give her a call. "Hullo Bethany" ....She dug the song the most and jumped at the chance to sing with Mr. Pop.

Meanwhile, Iggy Pop has been up to a handful of other stuff as well. As mentioned, he teamed up with Joe Jackson for Joe's upcoming Duke Ellington tribute album, which came out at the end of last month. You can stream that whole album below.

Iggy also released his own album earlier this year, Après, which is mostly made up of covers of French songs, in addition to covers of The Beatles, Frank Sinatra, Fred Neil, Yoko Ono and Cole Porter. You can listen to that album and hear Iggy talk about it in a YouTube playlist below.

In more recent news, he was interviewed by the NY Times last week, during which he dissed The Clash and talked about his penis. Here's an excerpt:

Many date the birth of punk rock to a show the Stooges played in London in 1972, which was seen by founding members of the Clash and the Sex Pistols. What did you think when the punks started releasing music a few years later?

I reacted to it better than I had to the hippie thing. As it developed, I couldn't stand the sincere punks. I never believed them. Still don't.

Like the Clash were going to make the world politically correct for everybody's benefit -- but only if you kept buying Clash records. I never really went for the righteousness. I went more for the profligate, sneering groups. I also realized that it was good that I wasn't doing that sort of music anymore. In penile, postpubescent rock, the generation is five years; it's not 25 years. It would have been worse if I was still knocking out stuff that sounded like my first record but not as good.

It's interesting that you call it "penile rock," because your penis seems central to your image. You're known for having had a lot of sex.

I wish I could have had more.

Really?
Well, theoretically. The problem is that it leaves you so little room to do other things.

Has your relationship with your penis changed?

In other news, the upcoming CBGB film (which stars Alan Rickman as Hilly Kristal), has revealed some other figures who will be portrayed in the film, including Iggy Pop. Keeping up their trend of interesting actor choices for the film, Iggy's character will be played by Foo Fighters drummer Taylor Hawkins. You can kind of see it.

Streams and a list of all Iggy & the Stooges dates are below.