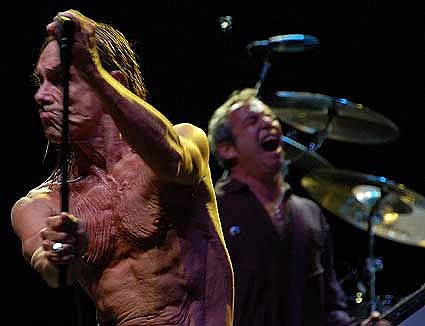 Montreal police have found the truck stolen Monday from American punk icon Iggy Pop and his band the Stooges, but tens of thousands of dollars worth of equipment is still missing.

"All the equipment was missing -- or almost," Lemieux said. "I think there were a few mike stands that stayed in the truck. Investigators are going to look for any elements that can help them try to find possible suspects.

"Are there any fingerprints in the car? Were any elements left on the scene that might help them find possible leads in this case?" Lemieux said investigators are also looking for witnesses....

...Almost immediately after the theft, the band vowed to continue with the North American leg of its tour, including Wednesday's gig in Toronto. CBC-TV accompanied Watt to a Toronto guitar store on Tuesday as he borrowed some replacement instruments.[CBCNews]

The Montreal gig was part of Osheaga. NYC is Friday. They are also playing the Baltimore Virgin Festival this weekend.