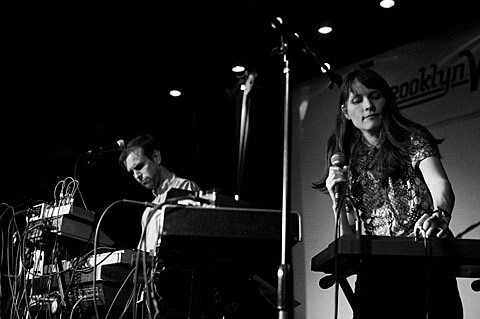 NYC synth goth vets Ike Yard played a NYC show earlier this year with contempory NYC synth goths Xeno & Oaklander, and now the two will team up again, this time bringing along another group of goth newcomers, Led Er Est. The three groups will play a late show at 285 Kent on September 7, which starts at midnight (so technically Saturday, September 8). No advance tickets for this one at the moment ($9 at the door), and more details on the show are below.

Xeno & Oaklander have a few other upcoming NYC appearances as well. They'll give a lecture at Public Assembly on September 16 called 'Analog as the New Folk,' where they'll discuss the analog synthesizer as the new folk instrument. The lecture is free and all ages. As mentioned, Xeno & Oaklander will also open the first of two Silver Apples shows in NYC. They support the band at their Public Assembly show (10/4) with Man Forever and La Big Vic (tickets), which happens one day before Silver Apples plays 92YTribeca (10/5) with CFCF and Win Win (tickets).

In related news, Led Er Est's Sacred Bones labelmates Pop. 1280 will be going on a short tour this September. The tour kicks off on September 1 at Death by Audio with METZ and Herzog Rising, and culminates in their appearance at Hopscotch Music Fest. After that tour, Pop. 1280 will support The Soft Moon at their previously discussed Bowery Ballroom show (10/30). That show is also with Group Rhoda and tickets are still available. The Soft Moon also play Glasslands on September 20 with Cold Showers and ERAAS (tickets).

A list of all dates, plus videos, are below.