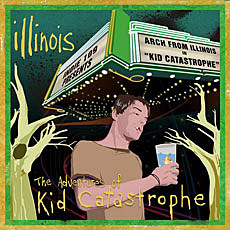 It's taking me too long to figure out what the heck is going on with the band Illinois and their new "The Adventures of Kid Catastrophe" "webisodes", so just know that chapter one premiered at Spin, chapter two premiered at Blender, and the band is playing a show in multiple cities (residencies) every time a new chapter is released and the NYC show for chapter two is tonight/Wednesday at Rehab. All tour dates and the series trailer below...