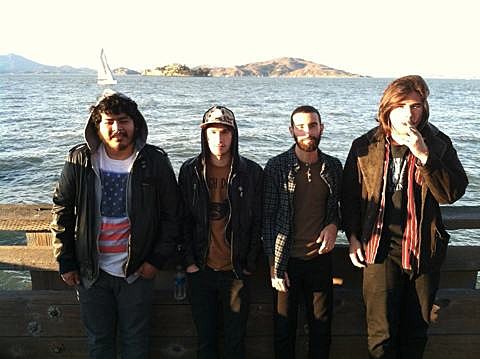 San Antonio's Illustrations are taking a bit of a strange approach to releasing their first album: they briefly put it on Bandcamp back in July, but then took it down in preparation for a vinyl pressing to be released in February. Kinda weird move, but also good news -- In Vain is a very good album, and the band deserves to make some scratch off of it.

If you missed In Vain the first time -- and most people did, I suspect -- we're streaming "Heaven" off the album over at Invisible Oranges. Here's a bit of what we had to say about it:

The first few riffs in "Heaven" suggest straight-ahead metallic hardcore of the HM-2 collector's variety. There's a big, strutting mosh groove; the guitar and bass seethe with mids; the vocalist sounds like he might not have a tongue. But then, about halfway into the tune, one of the guitarists unexpectedly takes off into delay-pedal melody-land. Good cop/bad cop dynamics are endemic to the meeting points between metal and hardcore, but Illustrations play them more subtly than most.

You can read the rest of the writeup over at IO.

Illustrations are currently in the midst of a Southwestern tour; more shows are purportedly in the works. Let's hope for an NYC appearance, because this stuff would kill live. The band's remaining dates SW dates are listed, along with streams of "Heaven" and the two other tunes that have survived on their Bandcamp, below...