iLoveMakonnen at MoMA PS1 in September (more by PSquared) 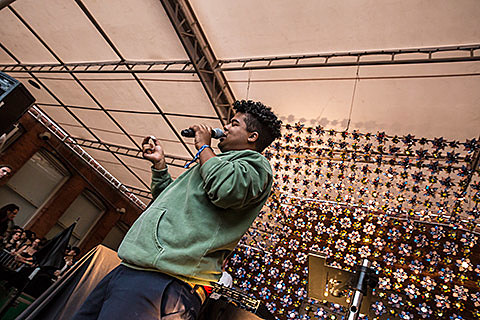 iLoveMakonnen played a CMJ show at SOB's on Tuesday (10/21) and while he was playing his hit "Tuesday," a crowd member tried to attack him. XXL writes:

The fan was in front of the stage while Makonnen was performing "Tuesday." He reached out for a dap and Makonnen gladly reciprocated in showing love back. The fan would then grab Makonnen, pull him down, and land a punch in before being taken away and escorted. No word on why the assault took place. Nonetheless, everyone continued to turn up, despite the skirmish.

You can watch a video of that below. Rae Sremmurd also played SOB's that night, and video of them playing "No Type" and "No Flex Zone" at that show is also below.

iLoveMakonnen Performs "Tuesday" and Gets Attacked at SOBs - 10/21/14