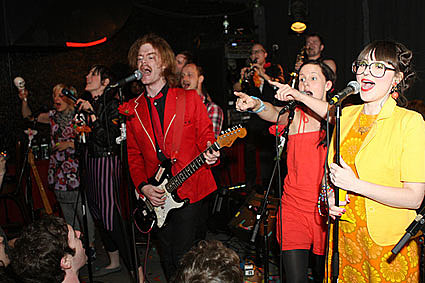 Ear Farm: And then you guys are playing the Brooklyn Masonic Temple next Thursday...

I'm From Barcelona: Yeah, I'm kind of excited about it. As I told you I like to read about stuff, brotherhood and societies, it's always fascinating, I'll probably sneak around finding weird symbolic stuff and building my own conspiracy theories. We did the pool parties with the same promoter last year and it was amazing[...] Another thing I'm looking forward to is we're doing a show Yo Gabba Gabba, it's a children's program on Nickelodeon, it's an amazing music program (ed note: see recent Shins performance on the program HERE). They want to pick good music for young people, they write their own music and we did a cover of it and are going to perform it there. I think it's going to be amazing because I've been thinking of doing a children's record.

Thao Nguyen with The Longest Band Name Ever opens the show in Brooklyn tonight (May 1, 2008). $10 tickets are still available AND I have one pair of tickets to give away (courtesy of show sponsor Boost Mobile Community) to the fifth person who emails BVCONTESTS@HOTMAIL.COM (subject: Barcelona) right now.