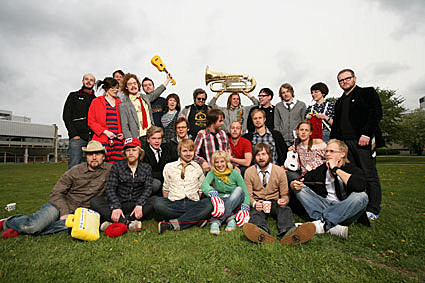 Grab your tambourine and get ready to sing along, I'm From Barcelona is coming to the US this August!

The ensemble band (29 members, count em!) is scheduled to play their first ever US show at the legendary Lollapalooza festival in Grant Park, IL on Saturday August 4th. The very next day the band heads to New York City where they'll play JELLYNYC's Pool Party at McCarren Park in Williamsburg, Brooklyn.

Videos of the insane large, happy, Swedish indie-group, below....

Here's one from a live show...

Their show reminds me of the similarly-sized indie-pop band I'm from Beirut.