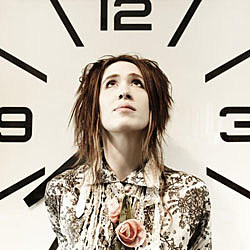 Imogen Heap's latest record Eclipse came out August 25th on RCA and is streaming online. Her current tour will make two NYC stops. The first is a December 2nd show at Webster Hall. Tickets for that are already on sale. The second will be the next night (12/3) at Music Hall of Williamsburg. Tickets go on sale Wednesday, November 18th at noon.

For the first leg of her tour (of which NYC is the last stop) she'll be backed by guests Back Ted N-Ted and Tim Exile, who also open the show. In February, she has a UK tour lineup, and writes that more US dates are on the way for April 2010.

Her tour kicked off on November 9th at LA's Henry Fonda Theatre (after having to cancel the originally scheduled first night in Santa Barbara, CA because of illness). The set list from that show and videos (a Twitter fan interview, the single from the new record and clips from Boulder, CO, on Nov. 14th) are below...