Impetuous Ritual at Rites of Darkness 2011 (more by Fred Pessaro) 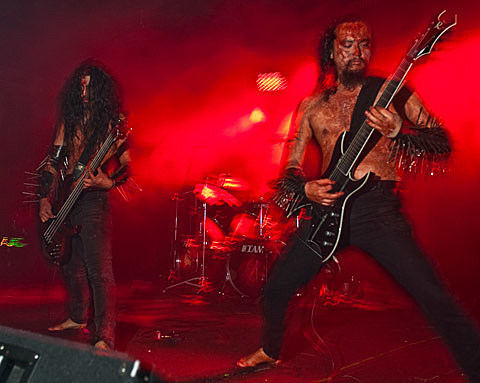 Australia's Portal are one of the more surprising breakout death metal successes of recent years. Though they're inventive players and have an instantly memorable visual schtick, their music is far from listenable. If you find Portal's wall of oozing noise a touch too impenetrable, Impetuous Ritual may be for you. This band shares a few key members with Portal, and the overall vibe is similar: murky, ugly death metal that draws on older American acts like Incantation, but that takes their sound to stranger places. The chief difference between the two lies in degree; Impetuous Ritual keep the insanity to more human levels.

IR's first album, 2009's Relentless Execution of Ceremonial Excrescence (!), was an under-the-radar gem. But now that Portal's (and weird death metal in general's) profile is much higher, there's good reason to think that its follow-up, Unholy Congregation Of Hypocritical Ambivalence (!!!), will make a big splash. Their label Profound Lore, which is also home to Portal, has announced an April 15 release date for the album. They've also released a song from the effort, titled "Venality in Worship," which you can stream below...