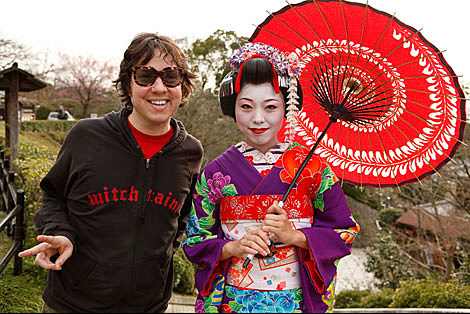 Hello. This is your man Dave Hill writing to let you know that Thursday, October 15 at 8:00pm, I will performing my brand new one-man show "Dave Hill: Big in Japan" like a motherf@#ker for the very third time over there at the Upright Citizens Brigade Theatre in historic Chelsea. Attendance is mandatory unless you hate having a really, really nice time that might also lead to sex. Anyway, I realize there has been a lot of confusion- especially in the Scandinavian press- about my new one-man show. And while there is some truth to the rumor that my new one-man show is a coming-of-stage tale based on my early years as a young Austrian girl who wanted nothing more than to express herself through dance even if her pimp Danny had different plans for her, it is mostly about one man's (me, silly!) undying will to rock the f@#k out of people and also this one time I went to Japan and rocked the f@#k out of people with my rocking rock Valley Lodge. Also- and I cannot stress this enough- it is NOT the same show as the Dave Hill Explosion so stop thinking that, dammit. However, my new one-man show is explosive in nature and possesses similar heatbringing properties and an almost identical bang quotient (sin(ax)sin(bx) - k cos(ax)cos(bx) = number of chicks who totally want to bang me). Anyway, I really hope you can make it. Aside from all the heat I will be bringing to the show, it is directed by the great Jeff Tomsic and assistant directed by the super dupes Nicole Brodeur. It also features the winsome Chris Chuang and the fiery Zachary Danziger in the roles of a lifetime. And as if all of that is not enough, my show is immediately followed by Pangaea 3000 Sucks, a great show that you totally don't have to pay extra for. So come, you know, if you want. I'm tired of fighting about it. You can get tickets right here.

That "Big in Japan" show is TONIGHT (10/15). The next "Dave Hill Explosion" is at the same venue on October 22nd and features special guests Gordon Gano of the Violent Femmes and the RETURN of Dick Cavett (not to be missed). Tickets are on sale.

In between those two UCB events you can catch Dave Hill playing two roles in one night. I'm talking about the official BrooklynVegan CMJ showcase at Music Hall of Williamsburg on October 20th where Dave is both playing guitar in the Walter Schreifels Band (expect Quicksand, Gorilla Biscuits, Rival Schools and more), AND telling some jokes and hosting the night. Tickets are still on sale.

"Big In Japan" happens again on October 29th at UCB. The flyer along with a very recent video of Walter performing solo in a store... IN JAPAN, below... 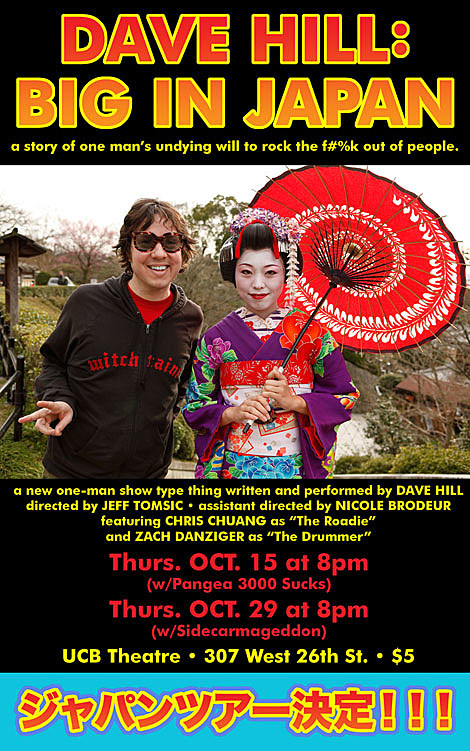