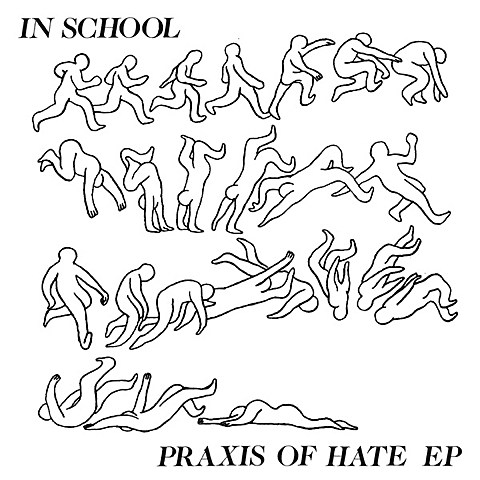 Sadly, tonight's (6/6) Fucked Up show at NYC's Bowery Ballroom with Big Ups is sold out, but if you are going, you might want to make sure you show up in time for openers In School (who also opened for Priests at Cake Shop earlier this week).

In School are a local NYC hardcore punk band with a demo and an EP, Praxis of Hate, to their name, one that is a reference to the fact that all four members of the band are (were?) in school at the time of its formation. Among the band's members are bassist Talya Cooper who sang for the now-defunct Household, and drummer Golnar Nikpour who was a one time coordinator at Maximum RockNRoll (she now edits B|ta'arof Magazine, an Iranian cultural magazine). Nikpour spoke with Fix My Head Zine last year about In School, and here's a bit from her interview (edited a bit for space), in which she talks about the band and its inspiration:

FMH: In School is an all-female hardcore band with queer and people of color members. Where do you find yourself located in New York? Within the predominantly white hardcore scene? With other people of color, queer or female-fronted bands? Or all of the above? Is that an issue at all?

GN: In School came together as a band because there was something natural and obvious about playing music together, not only because we are friends, but because I think we all feel some degree of insider/outsider-ness vis-a-vis the punk scene, even though we've all been involved with punk for a long time. That has to do with things like gender/queerness/race, etc. It also -- for me anyway, at this point in time -- has to do with being a bit older than a lot of the current hardcore/punk kids in NYC.

In truth, I think In School is a bit of an awkward fit in a NYC scene that is divided into a raw/crust punk scene that is younger and more drug-lovin' than we are, a largely whitestraightboy hardcore scene, some scattered emo kids, grrrl bands that are cool but not at all HC, garage & indie rock bands that are a world away from us in terms of DIY ethics, etc. When we show up to gigs all brown and kind of old and holding hands and wearing floor length dresses and shit (well, some of us to all of the above) but then play raging, angry hardcore, I think we confuse some people! It's no surprise (to me at least) that, while we have some great friends and supporters in these various NYC scenes, we've also garnered much of our support from outside of New York.

Musically, a few things things really stand out here--pretty killer guitar leads and distinct, sneering and PO'd, up-front-in-the-mix vocal delivery that sounds like it comes from the other side of the Atlantic. It doesn't hurt that all six songs on Praxis of Hate are catchy as hell. Give the EP a listen below.

In related news, you can also catch Fucked Up in NYC again when their tour hits Irving Plaza on September 6. Tickets for that show are still available.

Stream Praxis of Hate below...