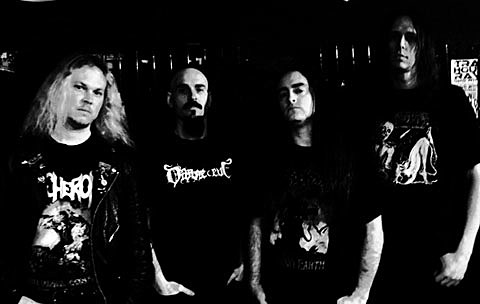 The sound of being swallowed whole into the bowels of hell -- a fitting description of the grotesque sounds that New Jersey lads Incantation captured on their debut album, 1992's Onward to Golgotha. Death metal at its most extreme, Onward to Golgotha does not let up one iota in its intensity -- evidenced in the vocal growls, manic riffing, and wicked drumbeats -- from beginning to end. - [allmusic]

Incantation will head to Rebel NYC to perform all of their 1992 classic Onward to Golgotha on November 20th. Ticket info is forthcoming. It's one of only three shows on the calendar for Incantation, with the other two being festival appearances at Hostile City Death Fest next weekend (8/27) and Noctis IV Metal Festival in Calgary on 9/24 with Sodom, Midnight, Rotten Sound, The Devil's Blood, Root, and many many more.